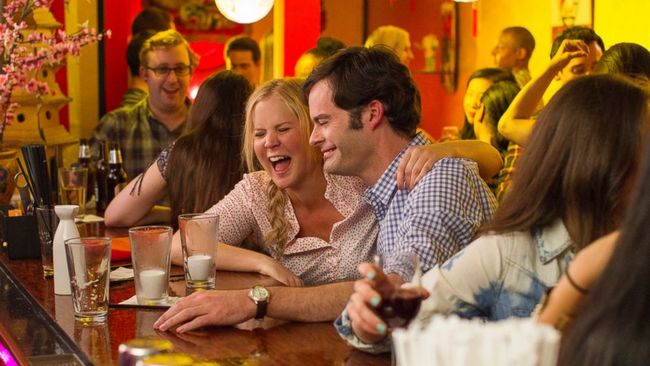 By Eric Mungenast
All of the essential, on-screen elements of Trainwreck work swimmingly. It’s a wicked funny film packed with terrific performances (including a couple from unexpected sources) and has one of the best central pairings in recent romantic comedy history. And yet, it’s still a somewhat underwhelming viewing experience, an issue that lies not in the fault of its stars, but of the man behind the camera.

The title Trainwreck refers to the life of the main character, Amy (played by rising comedienne Amy Schumer, who wrote the film as well) — a heavy-drinking, pot-smoking writer for a trashy New York magazine, S’nuff, run by the intense Dianna (Tilda Swinton). As Schumer describes it, her life is pretty sweet: She has a rocking apartment; a hunky boyfriend (John Cena); at least one pretty good girlfriend at work (Vanessa Bayer); a friendly neighborhood derelict (Dave Attell); and a prolific sex life. The lifestyle isn’t embraced by Schumer’s family though, consisting of younger sister Kim (Brie Larson), Larson’s husband and stepson (Mike Birbiglia and Evan Brinkman, respectively), and an ailing father (Colin Quinn).

Everything changes when she’s assigned a profile piece on a milquetoast sports medicine specialist (Bill Hader), whose clientele includes the overly genial LeBron James (played by James himself). Schumer can’t help but fall for the charming Hader, and they soon begin a journalistically unethical relationship that brings out the best from each of them. At least, it does for awhile, as life events conspire to make each question whether or not they’re committed to each other for the long haul. Will they work through their overwhelming differences, or will their drastically differing lifestyles tear their relationship apart?

Audiences will have a pretty good idea what the answer to that question is — a point I’ll hop back into in a bit — although the voyage Trainwreck takes to the final destination is a worthy one. The film is consistently hilarious, filled with an abundance of well-crafted one-liners and jokes that build up more and more as the actors and actresses keep talking (sort of like verbal avalanches). Amid the one-liners and some wicked offensive jokes — ones directed not at the group insulted, but at the person doing the insulting — are some rather offbeat, bizarre bits, including a movie about dog walking and a clever, subversive montage that’s probably the funniest part of the entire film. Both fit right into Schumer’s brand of comedy: Anyone familiar with her Comedy Central program, Inside Amy Schumer, will recognize both the style of humor and the underlying intelligence residing within those jokes. Schumer loves to deconstruct tropes, cultural norms and societal mores, and the best parts of Trainwreck follow that blueprint.

Schumer’s pretty great in her role too, but she gets some from co-stars Hader and Larson, both of whom are more than capable of keeping up with the star. Hader serves as a terrific sparring partner, capable of playing the straight man when needed and stepping out of that role and serve as a comedic delivery man (something he did on Saturday Night Live for years). Larson gets a few jabs in on occasion (and she really deserves a lead role of some sort), although she does her best work as the film’s emotional center and as a frequent check to Schumer’s antics.

Much of the delight of Trainwreck doesn’t come from the expected sources of humor like Schumer, Hader, Birbiglia, Quinn, Attell or even Larson; rather, it’s the athletes who tie everything together. Cena, the WWE star and sentient oak log, reveals a surprising knack for comedic timing, while the usually leaden James commits himself to his role as Hader’s buddy and protector. He displays a level of charisma one wouldn’t expect he possessed.

So much of Trainwreck goes right it’s an outright disappointment when it reverts back to the comedy tropes it skewers so well, succumbing to the genre’s comforting predictability while going on longer than it ought to. That’s what happens in films involving director Judd Apatow, whose cynicism is a thin patina to mask his enormous heart (not unlike James L. Brooks). While it works in films like Knocked Up and The 40-Year-Old-Virgin, it doesn’t fit the vibe for a film like Trainwreck, a film built to bomb those clichés from above.

It’s good that a film like Trainwreck exists; the film is the rare romantic comedy that fits both criteria, and it’s a funny and charming and genuinely winning piece of filmmaking. But it’d be an exceptional film on par with Annie Hall if Schumer’s influence shined brighter than Apatow’s.
​
Published with permission of author. See more of Eric's work on Inconceivable Reviews.
Originally published on GetOut  July 17, 2015.