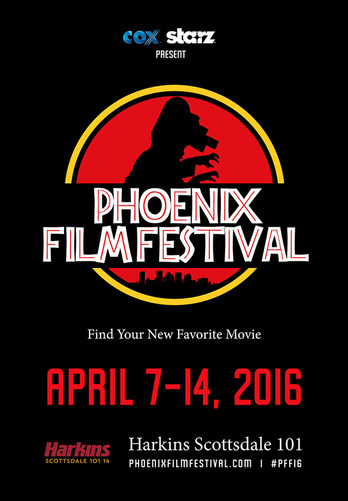 ​For the past 16 years, the Phoenix Film Festival (PFF) has been home for the Arizona film community and its continued growth has attracted filmmakers from all over the world. This year, the festival will run April 7-14 at the Harkins Scottsdale 101. The festival schedule is still getting locked down but a preview schedule is online.

Jason Carney, the executive director of the Phoenix Film Festival, explained that having an inviting festival is central to what makes PFF a success.

“Filmmakers talk,” he said. “‘Hey I’m submitting to this festival so-and-so told me about it,’ and they have friends who are filmmakers and their friends hear about that then they submit, or someone had a great experience last year — they’re our biggest advocates…We’re a filmmakers’ festival.”

Of the 10 films in the Competition Features category, everyone will have at least one person on site to represent the film, if not more.

“Filmmakers are here. They don’t just screen their film and then leave. Every screening is on the same campus as all of our parties, all of our workshops, all of our special events — all here at the Scottsdale 101,” Carney said.

This year already looks to have a full roster of incredible independent films. Of the Competition Features are several must-see films including Coming Through the Rye, A Light Beneath Their Feet and Welcome to Happiness. Also in that category, but documentary-style are Rwanda & Juliet, which follows the story of a professor who takes Romeo and Juliet to the war-ravaged central African country; Since: The Bombing of Pan Am Flight 103: a harrowing look at 1988 terrorist attack that killed 270 people; and No Greater Love, which looks at war and combat from the perspective of an army chaplain.
Other big ticket films that at the time of the interview, were still being scheduled are The Meddler with Susan Sarandon and Rose Byrne; The Man Who Knew Infinity, with Dev Patel and Jeremy Irons; Sing Street, directed by Irish-born John Carney, who also directed Once and Begin Again; and Midnight Special, which is 99 percent locked in and a big win for the festival Carney said.

“We had a record-breaking year (for film submissions),” Carney said. “The most we’ve ever gotten so far.”

Unique to PFF, is the Arizona Features category, which highlights local filmmakers. PFF is a great way to get familiar with local talent and see what Arizona has to offer by way of film production. Be sure to add Carry On: Finding Hope in the Canyon, Patagonia Treasure Trail, and Lucky U Ranch to your festival schedule.

This year, there will be a party pavilion just outside Harkins where filmmakers and film aficionados can mingle and talk movies. There will also be panel discussions on Saturday and Sunday, April 9-10, with various filmmakers. In the late afternoons, early evenings there will be a fourth “panel discussion” with podcasters from the Nerd Repository and Monty and Mary. Check the schedule for exact times.

There will be plenty of fun activities for children during the weekend as well. Kids’ Day will be on Saturday, April 9, from 9 a.m. to 2 p.m. Children of all ages will have the chance to experience the festival at a level appropriate to them. From art and crafts activities like coloring their festival poster, to music creation at the soundtrack station to the green screen, budding film fans can experience what goes into making a movie.

“We’re working with Starz on that green screen,” Carney said. “And we’re also working with Disney on the new Jungle Book movie. They’re going to have a green screen (as well), and they’re not going to just do Kids’ Day but they’ll be there throughout the weekend in the party pavilion.”

For anyone who has attended other film festivals, they will perhaps note the great lengths PFF goes to make its festival a center of creativity a place where people can meet like-minded artists and cinephiles. Whether you’re a filmmaker yourself or just love films, there is something for everyone at PFF.

“We want people to come to the festival and feel that they can get just as much of an opportunity to see the films, go to the parties as anybody can,” Carney said. “A big part of that is making our filmmakers available.”

PFF started in 2000 when some independent filmmakers came together to create a local festival. It has since grown to be the largest film festival in Arizona. Every year there are over 150 films shown, with parties and lectures and kid-friendly events. MovieMaker Magazine named PFF as one of The 25 Coolest Film Festivals in the World in 2013.

Held at the Harkins Scottsdale 101, 7000 E. Mayo Blvd., Scottsdale, PFF makes attending screenings simple. No running from one side of town to the other; the furthest one would have to go is across the lobby to the opposite side of the theater complex. This makes planning your festival day simple and time-effective.

Advance tickets for the festival are available online at phoenixfilmfestival.com. Tickets are as low as $13 for a single screening. There are various passes available including the cost affective Flex Pass, which includes tickets to any for films of your choice. Discounts for students and seniors are available.

See you at the festival!
Proudly powered by Weebly