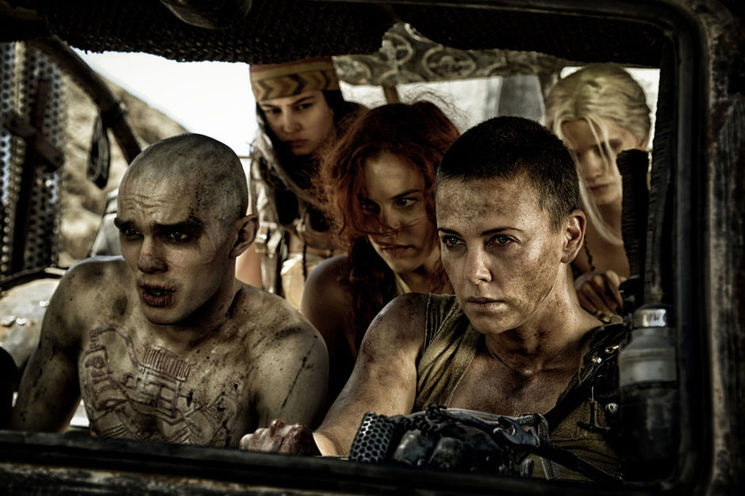 Madness to the Max

Originally published May 15, 2015 on GetOutAZ.com
It’s all about reboots in Hollywood these days. Moviegoers can’t turn their heads without spotting another Marvel movie, the fluttering of a DC hero’s cape, or hearing an earworm by John Williams set in a “galaxy far, far away.” And these franchises have been met with varying degrees of fan rabidness to revulsion. (Spiderman can’t seem to catch a break.)

So, it’s with some hopeful anticipation and no amount of worry that we approach George Miller’s “Mad Max: Fury Road.” It’s been 30 odd years since we last saw Mel Gibson’s Max tearing up the roads in an absurd race to survive the post-apocalyptic dystopian world.

For those who either skipped the originals or were not yet born, Max Rockatansky, now played by Tom Hardy, is a grizzled, anti-social nomad roaming desert wastelands. These patches of sand are fiercely guarded by territorial clans who drive ridiculously souped-up stock cars, and appear to worship petrol over water. (There is a snapshot of a pile of steering wheels that appear to be a shrine and murmurs that sound like suspiciously like “Hail the Mighty V-8!”)

It’s a world where punk style rules and leather is viewed as an acceptable form of clothing in what seems to be outrageously hot temperatures.

In “Fury Road” everything feels like it’s on steroids — and the villain Immortan Joe (Hugh Keays-Byrne) wouldn’t be out of place in a “Star Trek” episode, with his skull-like nitro scuba gear. (In fact, he looks a bit like Davy Jones’ desert cousin.)

With pharaonic grandiose, he rules a mutated tribe of desperate humans from a cliff fortress; runs an organ harvesting operation; and indulges in milk produced from his harem. The nubile ones (played by Rosie Huntingdon-Whitely, Zoë Kravitz and others) are in all intents and purposes, his sex slaves who bear his prodigy.

Enter Imperator Furiosa, played by a taciturn Charlize Theron. Through guiles and wiles, she steals Joe’s “wives” at their behest. Under the guise of fetching more oil, Furiosa makes a sudden detour east, driving a monstrous armored semi.

And the chase begins.

This is in essence the first 15-20 minutes of the film. Max is barely a footnote in all of this. He is literally tied to Nux (Nicholas Hoult), one of the “War Pups,” as a living blood donor. (Nux dubs Max “Blood Bag” with something almost like affection.)

Amid the mayhem of physically impractical vehicles, including a giant mobile stage with a flame-throwing guitarist and slave drummers, Max and Nux eventually join Furiosa and the desperate, but individually unique, women on their quest to find the “green place.”

Throw in some spectacular car stunts, mind-blowing fight sequences, and a sand storm that looks like something inspired by a NASA image, and you have the makings of the most utterly ridiculous, but totally fantastic summer blockbuster.

While there is hardly much to say about the dialogue—which is mostly shouting or terse three-sentence conversations—the acting is maximized in those brief moments where everyone can catch their breath.

Furiosa is the sort of female superhero the audience wishes to see more of. Smart, powerful, selfless, and with a bone to pick, Theron makes the most of her tight-lipped character.

In fact, the highlight of the film are the women. Instead of the cookie-cutter damsels in distress, or unrealistic Amazons, the wives prove that they each have their own mind, wants and desires.

It may come as a surprise that amid the testosterone injected action, “Fury Road” passes the Bechdel Test and pleases fans old and new. (Except for some rather vocal and petulant men’s rights activists.) Just keep in mind: “Fury Road” is like a syringe of adrenaline plunged straight into your heart — so hold on tight to your popcorn and soda: you’re in for a chaotic ride.