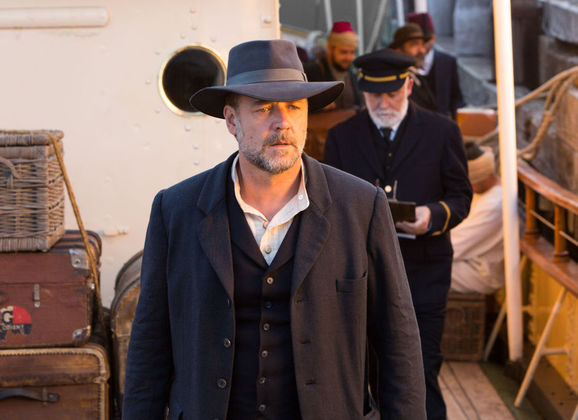 For many Americans, Gallipoli, the central battle in “The Water Diviner” might have only been a blip in a memory of a long forgotten high school history class — if it was covered at all. But it is seared into the collective consciousness of Australia and New Zealand who lost roughly 44,000 men. (And worse still for the Ottomans, who suffered some 87,000 causalities).

This is backdrop to Russell Crowe’s directorial debut. The main story, if you can call it that, focuses on an Australian farmer who goes searching for his sons’ graves four years after the bloody battle. The premise is at once compelling and heart-rending. Yet the execution of the story is like that of a novice. Oscillating between protagonists, and genre-types, it left me feeling disconcerted and emotionally raw. It’s as though the movie couldn’t decide if it wanted to be a serious war film or a swash-buckling adventure flick.

The movie opens with some information in stark white letters on black, listing the devastating and horrific tragedy the battle at Gallipoli was. One thing “The Water Diviner” makes abundantly clear: the war devastated both sides. (A point that is pounded into the viewer’s psyche continuously). The first scene shows the Ottoman trenches and the first protagonist: Major Hasan (Yilmaz Erdogan). He is a long-suffering man who hates war but is passionate about his country — a familiar war-movie trope. It is the end of the war and we see the Allied forces sailing away.

Jump ahead four years and a world away, we meet Russell Crowe’s character: Joshua Conner. An Australian farmer, husband, father, and water diviner. The first thing we see him doing is divining where to dig a well. The scene changes tone to something a little more Western in tone. In fact, the imagery is so stunningly like the American Southwest that it might very well be New Mexico. (John Wayne any one?)

The lightheartedness cowpoke feelings are dashed by the death of Conner’s wife; the blatant cold-heartedness of the county priest; and the final plea of “find our boys.” Long, wide shots of the Australian outback are stark and vapid, and vaguely reminiscent of another Aussie film, “Rabbit-Proof Fence.”

Fast forward again, Conner arrives in Istanbul and begins the ardous journey of trying to get to Gallipoli. A no-go zone for unauthorized persons. Another bounce, we are back in Gallipoli with the Allied forces and Major Hasan. A truce has evidently been drawn up for both sides are going back through the battle site and making the effort to identify the now 4-year-old corpses; an effort that is a first world history. (Please take note).

There is enough back and forth between the allied commander and Major Hasan to confuse the audience again as to whether this was a story about a bereaved father, Western guilt, or Turkish nationalism. This is not to discount the oddly placed flashbacks to the battle that Conner seemed to have. But having never fought in the war, it was bizarre. Are they merely his imaginings or does he have some psychic power? Let’s not forget the cuts to the almost Zen-like glimpses of whirling dervishes.

The back and forth between protagonists, time lines, and film genres will leave you spinning — much like those dervishes — who we eventually meet. Just when you start growing attached to one character he gets demoted to a supporting role; and back and forth we go. (And I won’t bother mentioning the oddly placed and forced romance between the Istanbul hotel owner and Conner).

In the end, the film tried to tackle far too much and lost its focus. Crowe’s skills as a director are clear — but like divining water, they need more practice. This film is by no means a winner in my book, but at the very least, it is worth seeing; if only to glimpse side of the first World War that is unfamiliar to most of us Americans.