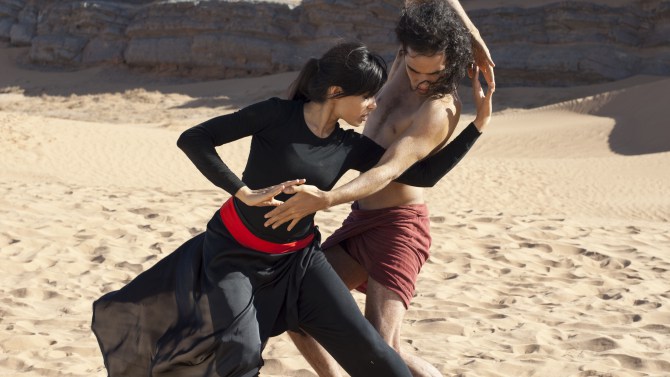 With all the attention the Middle East has garnered over the past 15-odd years, its no surprise that a bit of romanticizing has occurred. We are wired to want to know more about our “enemy”; and for many of us, there is a desire to convert them — at least in our minds — from foe to fellow human being. At the same time, we seek to justify our controversial actions in the Middle East.

Perhaps that is why a story like “Desert Dancer” seems like it would appeal to western predilections. But that’s just what knocks this film from a great story to a mediocre one. The movie oozes westernization, so much that it almost felt like pro-west propaganda.

It was shot completely in English, which already dilutes the authenticity of the story. The main character, Afshin Ghaffarian, spoke Persian and then later French in real life — not English.

To drive the wedge in further, there is only one Iranian actor — or rather actress — Nazanin Boniadi, who gets a speaking role of any significance. Of course this is forgivable considering that there are not many Iranian actors outside Iran. Still, there were far fewer Middle Eastern actors than expected. Our lead, Ritchie Reece, is British, having a South African mother and English father.

As for the actual story, it is interesting. Set in the late noughties, leading up to and after the tumultuous 2009 Iranian elections. The political opposition party known widely as the Green Movement, is prevalent throughout the film. So too is the incumbent regime that carries a big stick.

Amid this volatile landscape, we follow the youth of Afshin, an Iranian whose love of dance leads him to create an underground dance company. The film suggests that little Afshin’s dance fasciation began with a secret box of western films that included “Dirty Dancing.” From there we see him learn that the arts, and particularly dance, must be enjoyed away from the public eye.

The ever-present morality police who physically beat anyone who partake of anything “forbidden.” These include anything from alcohol to watching YouTube — and of course, dancing. But as with any repressive regime there are ways to circumvent the restrictions.

Fast forward to Afshin’s collegiate years, he attends university in Tehran and befriends some rebellious and western-thinking students. Together they create an underground dance company. Ironically, it is inside behind thick walls where they find freedom. It is both sad and touching, and it ruffled my own U.S. bred sensibilities of “freedom and justice for all.” But that was the point.

Throughout the entire film the political injustices were beaten like a monotonous drum, to the point where it lost its potency. The war between expression and repression felt like it was dictated from a soapbox.

But this was a story about dance, and the struggle to express oneself. In this aspect, the film was evocative and moving. It almost made up for the victimizing of the Iranians. The choreography that led up to the climactic performance in the desert stirred the dancer in me. It was mesmerizing, beautiful, heart wrenching, and cathartic all at once.

Reece Ritchie, who plays our emotional hero, fully captures the beauty and the struggle of Afshin’s story. His performance was completely engrossing, as was Freida Pinto’s, who played the love interest, Elaheh.

But the whole movie is weighed down by the Middle East soap-opera feel. It was nearly impossible to shake the black-and-white sermon of maligned artist good, Iranian government bad.

In the end the “West” swoops in and “saves” Afshin. France granted him political asylum, and that is where Afshin lives today. But the film never addressed what happened to the rest of his company in Tehran, or the members of the acting troupe he absconded with to Paris with. As far as the movie revealed, they had to go back with their dour-faced handlers. And after all the beatings in Iran, we can only surmise life would not be good for them.