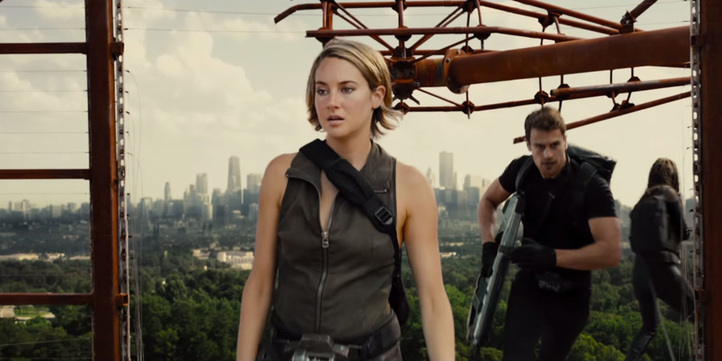 By Eric Mungenast
It’s clear the filmmakers behind Allegiant, the newest entry in the Divergent series, had a very specific audience in mind when they opted to make this film. The actors are very pretty, the dialogue is very simplistic, the plot is very straightforward, and the plot holes are big enough for a tank to drive through. So, perhaps but hopefully perhaps not, this film might work for the target audience, but anyone outside of that core demographic is in for a very bumpy ride.
Allegiant picks up right after the end of its predecessor Insurgent, which came out in 2015. The gate that separated Chicago from the rest of the world has opened, but new leader Evelyn (Naomi Watts, one of many people far too good for this film) prevents anyone from leaving. Instead, she hosts a series of trials to execute the enforcers who served under the previous regime. Not happy with how things are going, series protagonist/The Special Tris (Shailene Woodley) recruits her boyfriend Four (Theo James, aka diet Paul Walker) and a few friends from the other two films in the series (Miles Teller, Ansel Elgort and Zoë Kravitz) to see exactly what life is like on the other side of the fence and to see if the grass is indeed greener.

What they discover is a futuristic society (or one even more so than the future they exist in) headed by David (Jeff Daniels), a researcher who uses Chicago as a sort of experiment to see if humanity can rid itself of the defective character traits that define life in the Windy City.

Woodley, as the chosen one, is the key to his research, and he recruits her to meet up with a special council to save the denizens of her hometown. Things aren't exactly going swimmingly there though; Octavia Spencer's Johanna is waging a war against Watts for control of the city to restore the factions Woodley and friends fought to destroy, and things are getting out of hand fast. Daniels' David could be the last hope to prevent a civil war. Or are his motives could be far more nefarious than Woodley suspects? (Yes, of course, they are.) Regardless, shenanigans encompassing ships, angst, memory erasing, kidnapping, more angst, flying hockey pucks, and a hint more angst for the young stars ensue.

Allegiant’s flaws are legion. It’s generally poorly acted – the high profile names are not invested in this endeavor – and impressively hideous aesthetically with some god awful CGI, and even features dialogue that’s often redundant and definitely overly simplistic even for a film aimed at tweens. The hallmarks though are the plot holes, the gaps in logic that keep cropping up because the team of writers enlisted to write this travesty don’t know what to do with their characters. To use an old Roger Ebert concept, the entirety of Allegiant's plot machinations is dependent on people acting dumb and, in several cases, against their own or anyone else's interest. Daniels' David, who (spoiler) becomes the film's big bad, can undermine the entire counter operation run by Woodley's Tris and her friends without leaving his office. Or, at least, he should be able to enact his master plan with the flip of a switch from his couch in his boxers while watching RuPaul's Drag Race. But he doesn't, and he never designs his grand experiment to be able to enact his plan, because Allegiant makes little to no sense as a concept or as a film.

Yet, somehow, this is actually worse than “Insurgent.” At least that one had a solid grip on the relationship between Woodley's Tris and the appropriately handsome James, who work effectively as partners (admittedly a strength of the series). This time, for some reason, the writers have James' Four pull an Aidan and devolve into a misogynistic chazz to make Woodley’s Tris feel bad. There's also no good reason why the writers opt to make Watts' Evelyn as erratic as she is; it's as if they can't decide if they should make her Eleanor Iselin, Margaret Thatcher, Mussolini, or some strange hybrid of the three.

Little about Allegiant makes any sense. Even the full title listed at IMDB The Divergent Series: Allegiant – Part 1 is undercut by the name of the next film in the franchise, Ascendant, meaning Allegiant doesn't technically have a part two. Sadly, there is still, at least, one more film left to go in this franchise, and if it follows the pattern set by the last two Divergent films, it's not going to end well for anyone.
Rating: One and a half out of five stars.
Published with permission of author. See more of Eric's work on Inconceivable Reviews.
Proudly powered by Weebly